We all know Pablo Picasso and we all know he was a genius. Primarily known for his role establishing Cubism, he was also an efficient artist. He brought this discipline to each of his artistic periods including Traditional, the Blue Period, the Rose Period, his African-Influenced work, Neo-Classicalism and Surrealism. His innate talent and unstoppable drive meant that he produced an average seven new pieces of art every day. Today we have over 147,800 completed works of art from this amazing artist. At this point you may be comparing your own productivity to Picasso's his jaw dropping feat; try not to feel too bad about yourself. There was a method to his madness.

The presentation was not a Picasso art history lesson, but rather a lesson on how to apply this work ethic to your daily tasks. How can we apply Picasso to our work? Brian Sullivan and J. Schuh presented their findings on how the average worker can apply these Picasso techniques to achieve success. 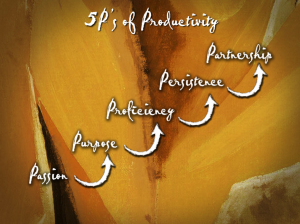 It all starts with the five P’s of Productivity: Passion, Purpose, Proficiency, Persistence and Partnership. These five components will pave the road to ‘producing like Picasso’.

The first words that came out of Picasso’s mouth was a form of the word ‘pencil’. Jose Ruiz, Picasso’s father, taught brush technique and was popular for his painting doves. When he noticed that his son loves to draw, he began giving him lessons. The start of his passion for art began at a young age and eventually led to his first oil painting at the ripe young age of 9. The name is the brand. Noticeably, Picasso has a different last name than his father. Could you imagine the iconic name being Pablo Ruiz instead of Pablo Picasso?

Picasso began art school and found himself daydreaming in class rather than focusing on what was being taught. “For being a bad student, I was sent to detention. I liked it there, because I took along a sketchpad and drew incessantly. I could have stayed there drawing forever.” 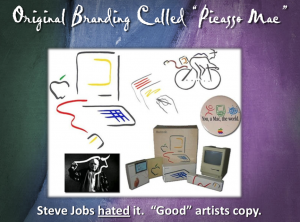 “Good artists copy. Great artists steal.” Stealing allows you to make something yours.

“Copying is doing exactly like someone else does. Stealing is when you take something, change it so much, the innovation is so disguised, so changed, that it looks like it belongs to you.” Steve Jobs can be known to use those words to his advantage. He took the branding that Picasso created and made it his own. Jobs considered Picasso his mentor and built the Apple brand using the artwork that Picasso created. If you notice the famous Apple ‘finder’ symbol, you will find a very close relation to the artwork of Picasso. Steve Jobs was shameless to steal ideas and build his brand off the work of this extraordinary artist.

There was no stopping the Apple empire, Jobs also wanted to be considered the Ritz-Carlton of retail. Someone is always there to great you at the door and the genius bar is a place to get advice on your products, rather than drinking a gin and tonic. Again, this goes back to the idea that Apple was shameless bout stealing great ideas. In order to be the best, you had to follow the footsteps of the best.

Looking back at the work of two brilliant innovators, they both continued to reinvent their brand and give their work a purpose. Picasso established his work in 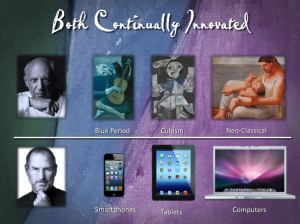 the Blue Period, Cubism and Neo-Classical, while Apple continued to push the boundaries with new technology including smartphones, tablets and computers.
Picasso held a great influence to Steve Jobs. Without his impact on the Apple brand, I would imagine some of the products we use today would not be the same.
“Steve Jobs admired Picasso because he could have taken a conventional approach and done it well for the rest of his life, but Picasso (like Jobs) tried to change things.” – Dr. Enrique Mallen, Forbes 2013

In part two of this article, I will deep dive into findings that Brian Sullivan and J. Schuh shared on the remaining three P’s: Proficiency, Persistence and Partnership. Stay tuned in our March newsletter for the final article!