The Role of Body Language in User Research 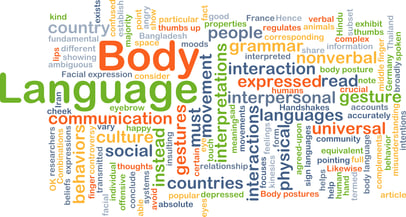 What is the role of body language in user research? Let’s say you find yourself in the middle of a test session and the user you’re with isn’t doing the best job of articulating their thoughts and feelings. You should remain vigilant in listening to the participant, but you can also focus more of your attention on their nonverbal behaviors like posture, hand gestures, facial expressions, etc. This nonverbal data can be coupled with other qualitative feedback you observe, and it will help you better understand what the user’s actual feelings and emotions are during the test session.

In 1967, two research studies (Mehrabian & Wiener and Mehrabian & Ferris) were conducted and in combining them we were first introduced to what is called the 55/38/7 Formula. The numbers represent the percentages of importance that varying communication channels have. The belief is that 55% of communication is body language, 38% is tone of voice, and 7% is the actual words spoken. The formula is not an exact science, and it must be applied appropriately, but the formula was created to provide a solution to one specific context – when the nonverbal channel and the verbal channel are not matching. More specifically, the formula speaks to this precise context: "When there are inconsistencies between attitudes communicated verbally and posturally, the postural component should dominate in determining the total attitude that is inferred." To be frank, what this means is that when you are in a situation in which someone is verbally telling you something, yet their body language is telling you something else, it’s the body language that you should trust to be more accurate.

The 55/38/7 Formula and the 3 C's of nonverbal communication both remind us that a single gesture or comment from someone does not necessarily mean something concrete, so don’t jump the gun too quickly. Within the user research arena, body language can be broken down into the following categories:

Common situations in UX research, and some of the more relevant emotions to pick up on while observing users, include:

Those are just a few examples of some key emotions you may be able to identify and validate using body language the next time you are conducting some in-field user research.

Honing these skills and utilizing them appropriately will improve the interactions you have with your test participants, and they will help you generate more accurate and actionable feedback from your users. A good moderator should be able to probe further if he/she notices an inconsistency between the user’s spoken words and the nonverbal body language cues they are exhibiting.

Be sure to check out the infographic for a quick review.