Mixed Reality and Guidelines for Developing in XR:  Part 1 -  An Introduction to XR

Part 1 of 3: An Introduction to XR

In this three part series, we are going to briefly cover what extended reality (XR) is and the different ways to think about this emerging technology from a user perspective.  When you hear the term XR it means the spectrum of space between the digital and physical world that includes physical reality, virtual reality, augmented reality, and mixed reality. In physical reality we interact with a world that provides us with immediate feedback on an object's affordances or it's properties and what the sorts of actions that can be taken with it. While in virtual reality, the physical world is removed and replaced by a virtual space and virtual objects. These virtual objects may have specific affordances that arise not from evolution but the limitless bounds of the designer’s imagination. With so many possibilities,  a person encountering a new virtual experience is similar to infant exploring her environment for the first time (Sherman & Craig, 2018).

In the XR spectrum, we have Virtual Reality (VR) on one side,  Physical Reality (PR) on the other, and in the middle a melding of the two worlds to create an entirely new experience. A major difference between Augmented Reality (AR) and Mixed Reality (MR) has to do with how the virtual content is anchored to the physical world. Think of AR as enhancing or adding to the real world by superimposing digital content that can only superficially interact with the environment  but in real time. MR is like this but on steroids, projecting 3D digital content that is spatially aware and responsive.  For the first time, virtual information can be directly integrated with the real world that surrounds the user, who can then interact with it to display information, to pose and resolve queries, and to collaborate with others (Höllerer & Feiner, 2004).

In this brave new world, real and computer-generated information can be coalesced in real environments, interacted with it in real-time and virtual objects made responsive to elements bound in the physical world. To ensure that the user will perceive digital information as really existing in the physical environment, however, requires a robust understanding of the design space and well-developed interfaces that are context dependent (Höllerer et al., 2004).  Perhaps you are like me and when you imagine MR, images of Tony Stark from Iron Man seamlessly manipulating digital data in the physical world come to mind. 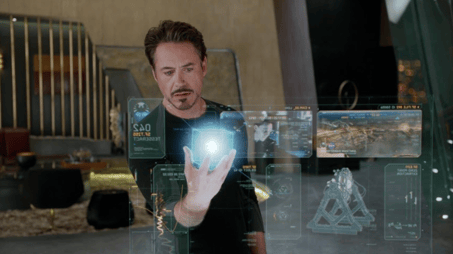 While this may seem more science than science fiction, the truth is that we still have quite a bit of ways to go before achieving these types of capabilities in XR applications. When we see examples like this in movies it can lead to unrealistically high expectations on what an XR experience should be. This adds an interesting hurdle when designing good UX around XR applications and one we will come back to a little later in this series.

Check out Parts 2 and 3 of this series:

Part 2: Mixed Reality and Guidelines for Developing in XR - The Cube Example

READ MORE: Getting Started with Training in VR, Three Questions to Ask Yourself Before Creating an Immersive Retail Experience, When to Use Zero UI: A Researchers Perspective, The Social Experience of Digital Reality Use