Who Is Your Most Influential UX Person? 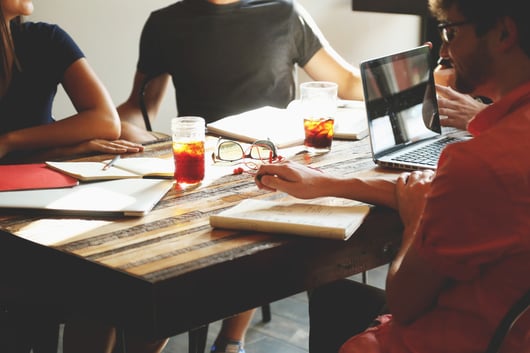 Since UX is still growing and developing, we as UXers have the privilege to watch, learn from, and even work alongside some of the most influential and just plain awesome people that are a part of this field. As a result, the UX field is extremely dynamic, constantly growing and evolving due to the impact those who work in this field can make.  So, we asked our team, “who is your most influential UX person and why?” Here are some of their answers:

“I'd say my top three are Jake Knapp, Aaron James Draplin and Stephen Gates. Jake Knapp is a Google Ventures partner as well as a Google Designer. He is also the author of the book “Sprint.” Then is Aaron James Draplin, who is a graphic designer. There are an Iot of talented designers and UX folks in the field and I firmly fall in line with Draplin’s mission statement - the idea of not only doing good work in a general sense but more importantly - "Doing good work for good people". Finally is Stephen Gates. I've had the privilege during my career to work alongside him as well as consider him a friend of mine. His leadership style has helped both influence me and help me grow as a researcher, has helped shape my storytelling and my presentation skills as well as has effectively refined my ability to challenge design decisions (i.e. "pile on the guts") in order to strengthen them overall. ” - Priscilla Lim, Lead UX Strategist/ Researcher

“When I first started UX, I was focused on the design side so I was obviously inspired by Steve Jobs and other largely important people in design. However, I was most impressed by a talk, and then later a book, written by Golden Krishna. Through him, I learned a lot about how to look at problems differently and to not just design a screen as the solution, but to focus on the experience as a whole and design that instead. He does a great job in breaking down various solutions to see if they are really the best way to solve a given problem, which I feel is something, as UXers, we must do everyday.”- Mariano Rodriguez, Jr. UX Researcher

“I would have to say my top three UX influences are Stephen Gates, Jesse James Garrett and of course, Steve Jobs. I have had the privilege to work for Stephen Gates, whose dynamic leadership style and sense of putting things together has had a great impact on my life. I also have been using UX tools Jesse James Garrett put together for years and as a result, has had me fall in love with UX architecture. My passions in UX design and design in general stem from Steve Jobs. His quote "Design is not just what it looks like and feels like. Design is how it works." is famous but it has always hit home with me. It has always been important that things work right for it to have a great design.” - Ferdie Martinez, Lead UX Strategist/ Researcher

“My person is Steve Jobs. People that work in UX are wired and geared toward improving user experiences, by spending a lot of their time advocating for user needs. Steve Jobs did this, and he had an amazing gift of being able to draw people in by communicating the benefits of his designs and ideas. He taught us that UX design is not how it looks, but instead how it works. We can all make something look beautiful, but if it doesn’t work or solve the problem then what we create is useless. This makes designing far deeper than just visual. Although aesthetics is extremely important the goal is to make the user’s lives easier. He fully understood the importance of making user needs the top priority for Apple. He stated, “If a user is having a problem, it’s our problem.” I have worked hard in my career to have this a standard rule. He not only taught me what is design, but he inspired me to work hard by saying, “All I ask is that today, you do the best work of your entire life.”” - Joe Jennings, Lead Designer

“First off is Danah Boyd; she is a social media researcher and a scholar (Microsoft Research, New York University Media Culture & Communication and the Harvard Berkman Center for Internet & Society). Danah is an exemplar of someone who is engaged in deep user research to get past the hype and sensational news articles about teenagers, sexuality, and the role of technology in their lives. Next is Atul Gawande, a surgeon and a public health researcher. His eminently humane and thoughtful books on how doctors learn to do what it is they do, as well as the evolution of diagnosis and treatment are moving illustrations not only of the power of research but of the need to consider problems holistically. Finally is Meena Kothandaraman, an Experience Strategist at twig+fish. Meena was one of my instructors for Bentley's Human Factors in Information Design MS program. She introduced me to a wide-range of research field methods and she expected nothing but the best from her pupils. Her insight, guidance, and sense of humor have been an inspiration to me since I started working in this field.” - David Hoberman, Lead UX Strategist/Researcher